Drawing and Painting A Deeper Truth

by The Nancy Who Drew 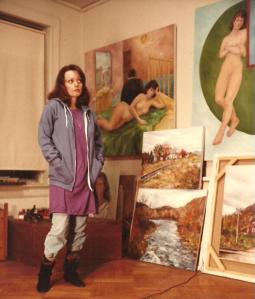 When I first began drawing from life, it was about expressing, showing, telling, what was before me. I was happy when the drawing of my ceramic coffee pot actually looked like my ceramic coffee pot. I wasn’t very good at flowers, but I drew vases and cloth dolls really well. And then I went to my first Life Drawing class at the Art Students League. I was twenty-eight, but it was still a shock in the beginning to have a naked person to draw from. What a giving of themselves! What generosity! And for peanuts. Sorry, I mean, for art.

The newness of it wore off quickly. Right away there was an intense need to focus. To match what the eye was seeing to what the brain knew, and send it out through the hand, through the stick of charcoal, and onto the newsprint pad.

First came the one-minute Gesture Drawings where we all warmed up, then we had several five-minute poses, then the twenty-minute poses. It all took a bit of getting used to. The studio was large and full of students, some of whom were quite marvelous artists already and were just there to hone their skills. Only a few were just beginning as I was. So I found myself fairly intimidated when I went around looking at other’s work as we all did during the breaks.

Then something amazing happened. The second day of class, or maybe it was the second week, I realized I was picking up the model’s feelings. I could feel the model. Just as a psychic or an empath might feel someone’s emotions or be able to read their thoughts, I could feel this woman’s body. It was in the line that I drew of her back. A curved line. Oh, there must have been other lines on my sheet of newsprint. I was probably in the middle of the drawing. But all I remember seeing was this one line. One line is all it takes, you know. One curved line that told me everything I needed to know about this girl, the model.

My first reaction was astonishment at this unknown power I had. The next time I went around looking at other’s work during the break, I couldn’t help noticing that however beautiful and accomplished the drawings were, most of them looked like a generic female form. It could have been any number of women they were drawing, not this specific one. The instructions, or the task we had, and it was very clear what we were supposed to do, was to get the pose right. And then the shadows. The instructor never asked us to feel what she felt like. In fact his paintings, charming as they were, were practically all the same. Pastel colors of his vision of the female. He obviously didn’t care who the female was. She existed only to allow him to portray his own personal vision. Which is fine, of course.

But what I was seeing in my own work was something different. I saw that I was picking

up her feelings. I didn’t know much about vibrations then, and picking up energies and so on. And I didn’t have to know consciously, because it was happening naturally, and all I had to do was to continue to let it happen, continue to translate the energy into charcoal lines on the newsprint paper before me. Drawing then became a form of excitement for me. I was still some years away before I started to paint my own feelings—painting figures from my imagination, but when I did I was so moved by what I saw – what I was able to express (finally!) that my life was turned upside down.

We all know that saying, The truth shall set you free, and I can attest that indeed, it does! The one truth that there can be no argument over – the truth of my own feelings.

And yet, you might be surprised at how many people tried to argue with me. “What is that?” or “You can’t paint that.” Or “That’s not right.” Excuse me? What’s not right? In your mind?

I had to leave art school when I realized that the instructors were more interested in having my work be what they thought it should be rather than what it actually was. And then over the years I was more fascinated by my own renditions and what I could create, than in making them ‘saleable’ pieces of art that someone else might like to hang on their wall. Painting my ‘truth’ was the only thing that mattered, for I had begun to see. And I saw that I spoke in a kind of sign language. A visual language of form and color that expressed my feelings more than words could ever do.

The trouble was, no one else understood, really, what I was trying to communicate. People would complement my colors. “Oh, that’s a nice blue,” someone said once. I was devastated, because I wanted them to see what I saw. To see what I’d done. But no one saw. Then I tried to write about what I had done. But my writing was totally abstract and vague. It was poetic, but vague. And this again was a great disappointment. In order to convey my thoughts properly, I had to actually give up painting and drawing and go back to school to learn how to write, which is a different language with different rules, but eventually I saw that writing had an equally great power all its own, which indeed could be mastered, for now I was learning how to create a picture in someone’s mind. The reader’s mind.

There are words and there are pictures, and underlying both is a vibration. A series of vibrations, and that is what we are called upon to pick up and align with and feel. In our very bones.

Nancy Wait is an artist a writer, a writing coach/editor, and author of the memoir "The Nancy Who Drew, The Memoir That Solved A Mystery." She is a former actress (stage, film and TV) in the UK under the name of Nancie Wait. She hosted the blog talk radio show "Art and Ascension," and more recently, "Inspirational Storytellers." Nancy is currently at work on the sequel to her memoir, "The Nancy Who Drew the Way Home," to be published in 2020.
View all posts by Nancy Wait →
This entry was posted in ART and tagged Art, Nancy Wait, truth, vibrations. Bookmark the permalink.

5 Responses to Drawing and Painting A Deeper Truth