What Is Art For? 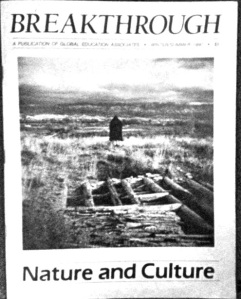 My cartoon appeared alongside this wonderful article by Suzi Gablik. I have copied a few paragraphs here:

What Is Art For?

Ever since modernism, the question “What is art for?” is one we don’t like asking. Modernism taught us, perhaps all too well, that art has no purpose beyond the purely aesthetic, that it cannot thrive constrained by moral and social demands. “The artist is not responsible to anyone,” claims Georg Baselitz, the German neo-expressionist painter. “His social role is asocial… There is no communication with any public whatsoever. The artist can ask no question, and he makes no statement he offers no information, message, or opinion. He gives no help to anyone, and his work cannot be used.”

This attitude began to take hold in the U.S. during the 1950s in the community of artists out of which Abstract Expressionism emerged. It was then that the totally self-possessed, self-reliant individual became the model for the typical artist in modern times. The gesture of putting paint on canvas became the ultimate gesture of liberation, not only from political and social norms, but from previous art history as well. History (which implies a responsibility to the past and a dependence on the achievements of others) was the obstacle to be transcended. A new art was necessary, and according to Barnett Newman, “[W]e actually began… from scratch, as if painting were not only dead but had never existed.” At that point, modernism so embraced the notions of freedom and autonomy that we now have whole generations of artists who doubt that art was ever meant to be integrated with society’s needs or purposes in the first place.

Certainly, much time has been spent during recent decades denying that art has anything to do with either spiritual or ethical values… As material and rationalist values have gained pre-eminence, spiritual values have declined in direct proportion… A mode of perception which incorporates the spiritual dimension—what Theodore Roszak has called “the Old Gnosis,” a visionary style of knowledge, as distinct from a theological or factual one, that is able to see the divine in the human, the infinite in the finite, the spiritual in the material.

This very conception has largely been lost to artist in the late twentieth century…Modern Western society seems to be unique in regarding its art as a commodity to be sold in exchange for money, prestige and power.

This, I have come to believe, is the true function of art: to become the instrument of transformation. Within each of us lies the potentiality for change. This is creativity in the deepest sense of the term. We are being asked not only to be experiencers and observers of change, but its architects. We are being asked to challenge the erroneous beliefs and assumptions which are now promoting annihilation, and to make new patterns, new paradigms. Any artist who can see this and is capable of knowing that he or she is one of those magical figures who can command spirits, who can make contact with the source of meaning and power as our ancestors did, has already taken the first step toward transformation.

Suzi Gablik is an art critic, author, teacher and former artist based in Virginia.

Nancy Wait is an artist a writer, a writing coach/editor, and author of the memoir "The Nancy Who Drew, The Memoir That Solved A Mystery." She is a former actress (stage, film and TV) in the UK under the name of Nancie Wait. She hosted the blog talk radio show "Art and Ascension," and more recently, "Inspirational Storytellers." Nancy is currently at work on the sequel to her memoir, "The Nancy Who Drew the Way Home," to be published in 2020.
View all posts by Nancy Wait →
This entry was posted in ART and tagged Art, Breakthrough magazine, meaning of art, Nancy Wait, purpose of art, spirituality and art, Suzi Gablik, teaching art. Bookmark the permalink.

2 Responses to What Is Art For?