Sparks Igniting One Another

At the beginning of my radio shows on Inspirational Storytellers I introduce the guest as a spark, setting up the idea right away that we are going to spark each other. The last few days I’ve been seeing how I spark myself.

1→It began a month or so ago when I happened to come across the phrase—probably in someone’s link on facebook—Turning Wounds Into Wisdom. I went to Huffington Post to have a look, and found it mostly a rehash of everything we’ve heard on the topic already. What a great phrase though!

2→It then occurred to me to do a reprise of a radio play I wrote a couple of years ago called, Mr. Woundid and Ms. Heeler at the Starbucks Café, because at least it made light of being wounded. And god know laughter helps.

3→Now I had to think of what else would go with it as the play wasn’t very long. In past years I had spent some time on radio talking about the Wounded Healer, so I looked up my old files. There was quite a lot of material I’d forgotten about. As I was putting it together I realized the title would have to be Sacred Wound, as that was the main theme. 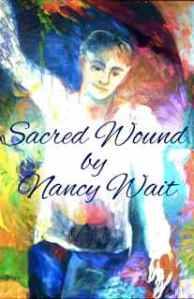 4→As I was deciding the order and beginning to do some revisions, adding new thoughts to the old, it occurred to me to create a mini-ebook out of the articles and give it away on the show.

5→Now I had to think of what I wanted on the cover. The painting of “George” would be perfect. I hadn’t shown it around much—and from the moment I painted it back in ’85 I had called him Wounded Man.

The ebook was finished about a week before air-date. The show was already posted on the Blog Talk Radio show page, and I updated the picture of the ebook cover which now had the title splashed across his chest.

6→Then I noticed the stock photo I was using to illustrate the radio play didn’t look that great with the copyright name smack in the middle. Why didn’t I create my own illustration?

7→With less than a week before the show, it was time to start generating interest. A blog would be nice. A blog about the painting of “George” perhaps. So I wrote a blog called “Meet George” and posted it on facebook. It turned out to be one of my more popular pieces. People were commenting about how they wanted to know more about “George.” I actually had fun writing it, because sometimes when you force yourself to encapsulate a lot of feeling and memory into a few paragraphs, you go for the “funny.” Details can be sticky. Explanations can be sad. But when you stick to the main point—boy meets girl—you’re on proven territory.

I told one commenter on facebook that the “George” story would be fully developed in the upcoming sequel to my first memoir. (Upcoming! Who knew when that would be? I’ve been working on it for over a year and a half already and it’s nowhere near done!) And then I felt bad about it. But I also felt good, because it’s always a good feeling when people are looking forward to reading your next book. Then I felt bad again, thinking, how could I deprive them of this story until an indefinite publication date?

8→Why don’t I write it now? Read that on the show instead of the ebook which I’m offering for free and which they could read for themselves if they’re interested?

I had already written about the “George” thing and how the painting on the cover of the ebook had come about. The writing was old, but it wouldn’t take a huge effort to modify it and bring it up to my current standards. After two marathon days of revision, I told myself it was okay, it was good enough. I titled it Geo for George. It wouldn’t be in print, only spoken aloud, and where the writing might be less than sterling, I would make up in vocal expression. 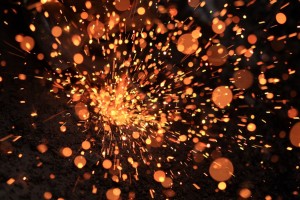 9→Meanwhile, the concentrated effort of revising and creating, launched a turbulence in my system that was whipping up new thoughts and ideas. The troubles I’d been having with my sequel resolved themselves overnight when I began to formulate a different kind of construction, a different layout.

I’ll keep that under wraps for now, and stop at number 9. Nine sparks. Nine is my Destiny Number. Nine signifies completion. Enough. I hope you will join me this Tuesday on Blog Talk Radio for a live reading (with me and veteran radio host, Gary Moore) of Mr. Woundid and Ms. Heeler at the Starbucks Cafe, and pick up your complementary copy of Sacred Wound, free from March 18th through March 20th.

LINK to Show at 5pm EDT; 9pm GMT, and afterwards always available in the archives.

Nancy Wait is an artist a writer, a writing coach/editor, and author of the memoir "The Nancy Who Drew, The Memoir That Solved A Mystery." She is a former actress (stage, film and TV) in the UK under the name of Nancie Wait. She hosted the blog talk radio show "Art and Ascension," and more recently, "Inspirational Storytellers." Nancy is currently at work on the sequel to her memoir, "The Nancy Who Drew the Way Home," to be published in 2020.
View all posts by Nancy Wait →
This entry was posted in Blog Talk Radio, Memoir, Uncategorized, Wounded Healer and tagged art and healing, autobiography, blog talk radio, creativity, Inspirational Storytellers, memoir, Mr. Woundid and Ms. Heeler at the Starbucks Cafe, Nancy Wait, radio play, sacred wound, sparking inspiration, wounded healer, writing. Bookmark the permalink.