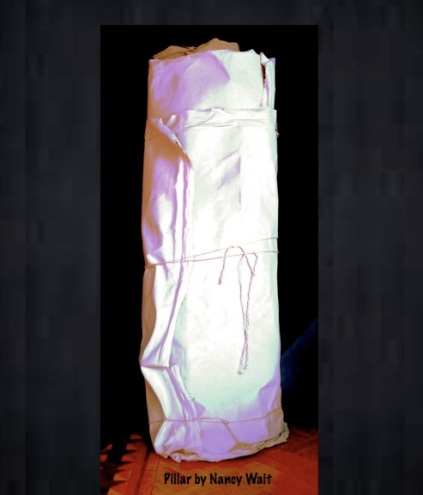 When it happens that you are a painter with unsold canvases stacked against the walls of your studio and now you have to move, you do the sensible thing and put them in storage because they aren’t doing anyone any good, least of all you. Better these space hogging works of yours should be kept out of sight, yet safe and ready to be pulled out from the darkness whenever you might need them again.

But did I need them again? Once created, view by me over and over again, slides dutifully taken should I ever think to approach a gallery, what was their purpose?

Still, in and out of storage they go, from Manhattan to Brooklyn, under lock and key sandwiched between neighboring compartments filled with a multitude of unknown paraphernalia belonging to others who are also hanging onto things they have no room for at home. But this is New York, and rent for storage, like everything else, goes up every year. So you decide to bring them home again, whether you have the space or not.

Years go by and you are no longer painting, but these are icons of your past, a colorful archive of people and dreams that once haunted you and drove you to such distraction that you had to paint them or die. The dreams changed, the faces too, but the paintings lived on, a record of past struggles. A testament to your triumph over adversity simply because you were able to create a beautiful picture of whatever emotions you were going through, usually comprised of tortuous bliss in its various guises. Heaven and Hell and back again in glorious extremes of color.

Your mind still remembers the sadness of disappointment and betrayal, but the pictures, even when they were sad, spoke of harmony. They may have portrayed a havoc of emotions, yet the world came out balanced. They transformed chaos into line and color. Shapes and forms on the canvas that represented feelings and thoughts you no longer had to keep buried inside because you had no words for them.

You knew this was your very own treasure, whether or not the world saw or cared. The world went about its business, and you went about yours, which eventually meant going back to school in order to learn how to write. You would write the story of the paintings, how they came about and why. Because even though the creation of them represented a mere ten years or so of your life, the backstory felt ancient.

The day you came home with your brand new MFA and saw the paintings stacked against an entire wall of the living room, the smaller ones stacked on top of the larger ones all the way up to the ceiling, you knew enough was enough. It was time to take the canvases off the stretchers and roll them up to save space. Chuck the smaller rolls into the back of the big closet, the larger ones could go in the basement.

It took hours and hours to remove a multitude of staples. Then sweep up them up into a pile of metal in order to make way for the painted sheets of canvas, now freed from the bondage of wooden stretchers. You lay them out on the floor, the largest ones first, and take one last look before rolling them up one by one. The stretchers, meanwhile, have been put out on the pavement, stacks and stacks of wooden rectangles and squares leaning against the iron railings, and are quickly snatched up by an artist from Staten Island who happened to be driving by your house at the time.

Another ten years or so go by, during which time you finish your book and publish it, and call it The Nancy Who Drew. It has a subtitle too, The Memoir That Solved a Mystery, because it was through the writing of it that you discovered what you were on about all those years of painting pictures.

But the pictures, what of them now? The rolls have been squashed together so long in the closet that they have become flattened out. You figure the ones banished to the basement are probably full of mildew by now. And suddenly you can’t bear to think of them neglected down there, left to suffer any more humiliation than they already have. So up they come, back into the warmth and light of your apartment, and this time they are rolled up into one giant roll. During this process you don’t notice any mildew, but damage has been done. Paint has cracked. The floor where you laid them out flat is covered in tiny flecks of color. Their condition cannot be described as anything other than poor, but there’s no use grieving over it now. Just secure the roll with some twine and maneuver the cumbersome thing into the corner behind the door.

A few more years drift by, during which time you write the rest of the memoir, volume two which actually addresses your life as a painter. And one day you happen to look behind the door at the roll of canvas tied with string and think my god—it looks like a pillar! It’s certainly thick enough, and almost as tall as you are. So you think about pillars then, and how they hold things up that would fall down otherwise.

Many more curious thoughts spring to mind having to do with pillars, but this must be all for now. Suffice it to say that thirty years after painting the pictures, what has come to matter most about them is the light they contain, now hidden and out of sight, yet there all the same. For the light is what I went for originally. Searching for my inner light through the darkness of outer reality. Within the pillar you will find my song.

Nancy Wait is an artist a writer, a writing coach/editor, and author of the memoir "The Nancy Who Drew, The Memoir That Solved A Mystery." She is a former actress (stage, film and TV) in the UK under the name of Nancie Wait. She hosted the blog talk radio show "Art and Ascension," and more recently, "Inspirational Storytellers." Nancy is currently at work on the sequel to her memoir, "The Nancy Who Drew the Way Home," to be published in 2020.
View all posts by Nancy Wait →
This entry was posted in ART, Memoir and tagged Art, art and feeling, art and memoir, inner light, light within, memoir, painted light, painting, painting on canvas, pillar of light, the nancy who drew. Bookmark the permalink.