I was waking up to myself. A dream I had around this time suggested there was an urgency for more awareness. In the dream I was called before a panel of judges. Auditioning before a panel of judges had been the bane of my existence as an actress. Will they want me or reject me. Always that need to be wanted, accepted, and it’s shadow, the fear of not being good enough. The underlying nature of an audition meant offering yourself to be rejected. It didn’t matter how talented you were or what experience you had if you were not what they had in mind. Their minds. Pleasing them. The inquisitors. It was understandable that my dreamtime would reflect those tortuous memories.

One of the judges belted out, “Who are you?”

I was silent, too petrified to speak.

The question was repeated, louder this time.

My mouth was dry with fear. I didn’t know what to say, what answer to give.

I reached into my stomach for a piece of gut. (The beauty

of searching for my gut feeling!) My hand was magically able to reach through the skin of my abdomen to pull out a piece of intestine. A small piece only a few inches long that was dried out, mummified.I held it as a silent offering.

The judges were not appeased. The demand was repeated a third time. 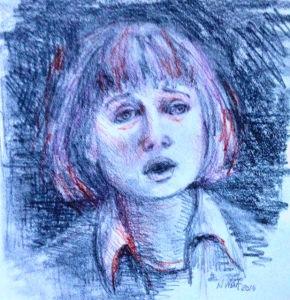 I had to say something. The name Renoir came to me was. I whispered, Renoir. Then I woke up.

Renoir? But I couldn’t be Renoir. I scrambled out of bed to look at myself in the mirror. It was dark in the bedroom and I didn’t want to wake my husband so I hurried to the mirror above the sofa in the living room. Day was breaking, but there was enough light to see that I still looked like myself. Even as I knew it was crazy, I half expected an old Frenchman in a straw hat with a white beard to peer back at me through the mirror. The dream had been that real. Lately, I had also been catching myself stroking my chin, as if to stroke an imaginary beard or goatee. It only happened when I was painting, but I thought it an odd thing to do. Was I trying to give myself a message that I had been Renoir in a past life? I didn’t think so. It was wishful thinking wanting to be a great painter, but I didn’t want to be Renoir. I loved his paintings as a child and admired him now, but I had never aspired to paint like him, let alone be him.

This unlikely dream remained unresolved but not forgotten. I finally made some sense of it when I started seeing the name as a word in French. Re-noir instead of Renoir. Re noir. French for back-to-black. Black, as in the darkness of the subconscious, the unknown. It was what I ended up doing as an artist, painting my subconscious. I went into the dark to shed light on it. Who was I? Not Renoir, but one who would re-noir. Return, go back to what I’d left behind, buried in the depths of my subconscious. What I knew was there in my gut. I would have to go back. The judges, those who were watching and judging me on the inner planes, demanded it. I would one day come to see the dream as part of an initiatory process, and I would know that the harshness of the judges was merely a reflection of how I judged myself in those days. Who are you was the question that gnawed at my insides. Because I did not know who I was.

It had been a long time—four or five years—since a light had shone on my inner world. Not since that morning in London when I awoke from a dream of death and the door opened at the bottom of the sea. The door to the inner world. Then a message filtered in that I had things inside, knowledge, that I could only reach by painting or writing. Until that moment, the inner world had seemed as impregnable as it was dark. But now my life was focused on seeing. Feeling what I saw. The Renoir dream was a wakeup call. It was time to get in touch with the inner knowing I didn’t even know I had.

(This is an excerpt from my new book, the sequel to The Nancy Who Drew, the Memoir That Solved a Mystery. )

Nancy Wait is an artist a writer, a writing coach/editor, and author of the memoir "The Nancy Who Drew, The Memoir That Solved A Mystery." She is a former actress (stage, film and TV) in the UK under the name of Nancie Wait. She hosted the blog talk radio show "Art and Ascension," and more recently, "Inspirational Storytellers." Nancy is currently at work on the sequel to her memoir, "The Nancy Who Drew the Way Home," to be published in 2020.
View all posts by Nancy Wait →
This entry was posted in ART, Memoir and tagged being judged, dream world, gut feelings, inner awareness, inner world, memoir, Nancy Wait, subconscious knowing, the nancy who drew, who are you. Bookmark the permalink.

2 Responses to Re-noir – Not Renoir