Only A Dream Away 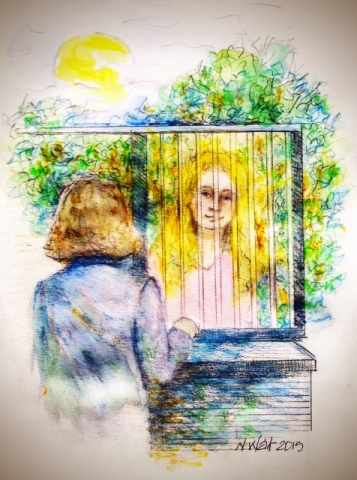 Recording a dream in watercolor and colored pencils, by Nancy Wait 2015

On Thursday, March 26th, I went to see my mother twenty-eight years after her death. It wasn’t until after I woke from the dream that I realized her hair was yellow. Long yellow hair falling past her shoulders. My mother had dark hair; she had never been a blonde, never worn her hair long.

Then the reason came to me. She was in her light body.

Earlier that day I had been writing about a painting I’d done years ago of two figures, one light-haired, the other dark. The fair-haired one represented innocence and being born anew. The dark-haired one was off to the side feeling sad and dejected. I had been up since 4 a.m., so by the afternoon I was ready for a nap. 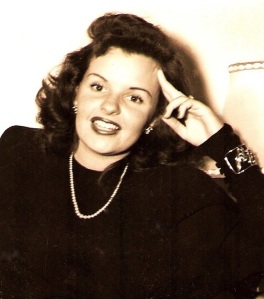 During my nap I dreamed I was on my way to visit my mother where she used to live in Decatur, Illinois. I had taken the bus, and we stopped to change buses. I went to buy a ticket for the last leg of the journey, and saw my mother behind the ticket counter with long yellow hair.  I asked if she could give me a lift back to her house. She said it wasn’t possible, and, “I’ll see you there.” Then she sort of faded into the background of the parking lot…

Waking up from the nap was like emerging from a deep well of the unconscious, and I struggled to get my bearings. I had to remind myself that my mother was no longer alive. Then I looked at the lock-screen on my phone and learned that while I was sleeping there had been an explosion and fire and building collapse in the East Village, two blocks from where I lived twenty-eight years ago when my mother died. As the day progressed I divided my attention between coverage of the fire and thinking about the dream of my mother with yellow hair.

This was in fact the third visit to my mother in the afterlife. The first time was shortly after her death, that same week in fact, when I saw her with her parents, seated between them in their old house in Decatur. Their faces were ghostly white, and I realized my mother didn’t yet know that she was no longer in the physical body. Her passing had come out of the blue, catching us all unawares. She hadn’t suffered an illness or seen death approaching. A cerebral hemorrhage had taken her, taken us all, by surprise. Then, a few years later, in the next decade, I went to see her again in a dream. We were on a cruise, sailing between the fjords, and she was comparing our leather handbags, saying I had the better one. (Comparing animal skins, our animal bodies, who had the better “skin.”) This harked back to an issue of our relationship in life, and I thought I’d better leave her alone for a while. Fifteen years passed, during which time I got on with my life, and my mother got on with her evolution in the after-life.

That the third dream should come this week was no accident. After the solstice and the eclipse and the new moon, shortly before Easter, and shortly before my mother would have turned 90, I was thinking of my older sister, Kathleen, who would have been 70 last Monday. Kathleen passed away 20 years ago when she was 50. (All these round numbers!) It was clear to those of us who knew Kathleen, that when she departed this life she was headed straight back to the angelic world. I have kept Kathleen’s picture on the mantle all this time, but this year on her birthday, finding that I missed her presence more than usual, I decided to post her picture on facebook and pay homage to her memory.

I would not be at all surprised if Kathleen had a hand in arranging the meeting with my mother. Or that I was now “light” enough to see my mother’s lightness. I miss my loved ones, yet though they are gone, I know they are only a dream away.

Nancy Wait is an artist a writer, a writing coach/editor, and author of the memoir "The Nancy Who Drew, The Memoir That Solved A Mystery." She is a former actress (stage, film and TV) in the UK under the name of Nancie Wait. She hosted the blog talk radio show "Art and Ascension," and more recently, "Inspirational Storytellers." Nancy is currently at work on the sequel to her memoir, "The Nancy Who Drew the Way Home," to be published in 2020.
View all posts by Nancy Wait →
This entry was posted in ART, Memoir and tagged afterlife, alternate reality, Art, bridges in consciousness, bridging worlds, dreams, memoir, remembering loved ones, the light body, the nancy who drew, Transitions, visiting loved ones in the afterlife. Bookmark the permalink.

1 Response to Only A Dream Away