When I Wasn’t A Writer 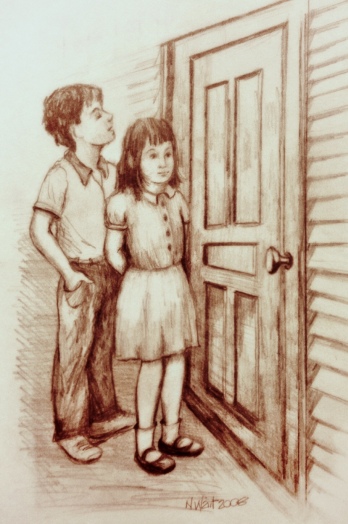 I have wanted to tell this story for ages, but was never able to fit it into my memoir. I made a pencil sketch of it back in 2008 because it was preying on me so much,The sketch says it all. Two children stand before a closed door. The girl’s hands are behind her back; the boy’s hand is in his pocket. The girl stares at the doorknob.

I was twelve or thirteen. My father was a writer. All through my childhood I had listened to him tapping away on his old black Underwood typewriter. He never read us any of his writings, but he told marvelous bedtime stories. On this particular day I borrowed one of his yellow legal pads to write a story of my own. I had never written a story before, nor did I think I had any special calling in that area. So it was either a school assignment, or else I was feeling particularly adventurous.

The story went something like this. There was a boy named Andy and a girl called Andrea, and one day they went for a walk. They came to a house. Now, already I knew I was getting into Hansel and Gretel territory, but it was too late to think of something else. So they stood before the door and wondered what to do. Should they knock? What if somebody answered? What should they do then? Or maybe the door wasn’t locked… Should they try the doorknob? What if it opened? What should they do then?

I couldn’t answer any of these questions. I had no idea how to move the story either forward or back, so I left them there, outside the door, wondering what to do. I was terribly disappointed in myself for my lack of imagination, and right away I assumed I was not, and never would be a writer. I became an actress instead, rejoicing in the opportunity to act out other people’s stories. But I never forgot about Andy and Andrea, and my shame in leaving them standing outside the door, wondering what to do.

The years passed, about thirty of them, and now all I wanted to do was write stories. I didn’t think whether I was good or bad at it because I was in school. I had teachers and fellow classmates, and my focus was on learning. But one thing I had already learned, that in order for me to write anything worthwhile, I had to have lived it first. It seems I was wired for non-fiction.

So I wrote memoir. I started remembering the past, and recalling it in greater and greater detail. And this brought up the memory not only of Andy and Andrea and the door, but of all the other doors I had problems with in my non-fictional life. In fact, the story of Andy and Andrea was a big clue.

I then started to analyze their story as I would analyze a dream. I looked up their names in the dictionary and found they were really the same name, as Andrea is derived from Andrew. So I had a girl and a boy with the same name. As if they were the male and female aspects of the same person. How interesting. It became even more interesting when I took into account that I was coming up to puberty. I can remember knowing I was a girl, but not knowing myself as a female. One has to do with appearances, the other has to do with the energy body. Yet it wasn’t really about them, the boy and girl, it was about me and my fear of the unknown.

There is more to the door story. Maybe not that particular door, but doors in general. The theme of doors, some real, some in dreams, and some metaphorical, has run through my life. But here’s the thing. I was meant to be a writer, just not then. I had to wait a while, till I had something I could write about. Leaving the boy and girl on the threshold was perfect, because that’s where I was—on the threshold of adolescence and all sorts of new discoveries.

Meanwhile, I have learned that doors are closed for a reason. Some of them I might want to bash my way through, and some I might have to wait to open. But still there are others, the ones that seem to magically open by themselves… And each instance contains a story of its own… But first we must step up to the threshold… or we’ll never know.

Nancy Wait is an artist a memoir writer, author of "The Nancy Who Drew, The Memoir That Solved A Mystery," and a former actress (stage, film and TV) in the UK under the name of Nancie Wait. She once hosted the blog talk radio shows "Art and Ascension" and "Inspirational Storytellers." Her current project is a second memoir, "The Nancy Who Drew the Way Home."
View all posts by Nancy Wait →
This entry was posted in Art of the Path, Memoir and tagged Art, autobiography, creativity, drawing, Dweller on the Threshold, memoir, Nancy Wait, the nancy who drew, writing. Bookmark the permalink.