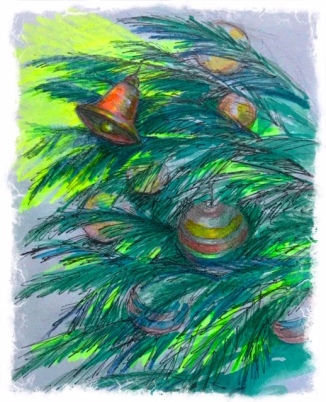 In days of old when we sat in awe around the lighted tree, my father told us that if we heard a bell ringing, it meant an angel was present. We had to be very quiet, and then unbeknownst to us, he tugged a hidden string and we heard the bell. Magic! The spirit of Christmas itself. Then I grew up. Many Decembers came and went. Then one spring I heard the magic of bells again.

I was in a car. I had just been to see a client and he’d offered me a lift to the subway. A car is a small, intimate space. I might say that as much as the car was enveloped in midtown traffic, I was enveloped in an energy field. His. We came to the subway, the car stopped, and just before I got out, he leaned over, brushed my mouth with his lips, and I heard bells. It was a soft, distant ring in my inner ear, but it was bells. Bells! When he drove off I was so weak in the knees I had to lean against the fire hydrant. I thought of Ginger Rogers in “Tom, Dick, and Harry,” because she heard bells when one of them kissed her. Yet by the time I took the train home I felt something else was at work. So I got to work, transmuting the feeling into paint, which is another story, too long to go into here, but the picture had to do with lighting up a dark place. I thought it started with the kiss, with hearing bells. And it did, because kisses are no small matter, especially when bells go off in your head.

I never heard them again, not in that way. And it’s only today that I’ve put the two memories together, the angel ringing the bell on the Christmas tree, and the kiss that rang in my ears and resonated in my soul. Both were magical. It doesn’t matter that my father pulled a string. It only matters that I thought it was an angel. So that later in life I would be ready for a certain kiss. And the ringing that turned into light on the canvas.

My thanks to Jennifer Warters of Rainbow Light Trust for her teachings on sound and light.

Nancy Wait is an artist a memoir writer, author of "The Nancy Who Drew, The Memoir That Solved A Mystery," and a former actress (stage, film and TV) in the UK under the name of Nancie Wait. She once hosted the blog talk radio shows "Art and Ascension" and "Inspirational Storytellers." Her current project is a second memoir, "The Nancy Who Drew the Way Home."
View all posts by Nancy Wait →
This entry was posted in Memoir and tagged angels and bells, autobiography, Christmas, frequencies, hearing on the inner plane, inner awareness, magic, Nancy Wait. Bookmark the permalink.