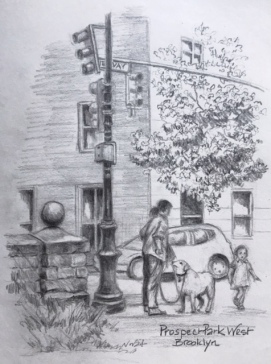 The other day when I was drawing, I was reminded (on a visceral level) that everything is connected.

I’ve always taken it for granted that while I’m drawing, my brain is making all sorts of hand-eye connections. But now it hit me that along with this automatic brain activity, what I’m doing is connecting disparate objects in space in order to draw them, which isn’t necessarily automatic. I mean, it can become automatic if you’re used to drawing, but it requires a type of thinking that has to be developed.

Before I started drawing it, I looked at this scene of the entrance to the park at Third Street on Prospect Park West, and saw a stone fence, a lamppost, a woman with her dog and child, etc. In other words, a place composed of various subject matter. But once I began the sketch, though I still saw these things, I stopped identifying them by name. Instead I saw darks and lights, and what related to what. It’s this last, the relationship of these forms to each other and how they’re connected in space that actually makes up the sense of the drawing.

I don’t usually notice how forms relate to each other unless I’m arranging something purposefully like furniture or a still-life or setting a table. I do it without thinking. It’s drawing that makes me think.

I did this sketch from a photograph I took on a Sunday when I was sitting just inside the entrance of the park. It was a bright sunny day and the colors were brilliant. The car in the background was red, the leaves green, the traffic lights yellow, and so on. But I was enjoying myself so much in pencil that I stayed with it, even though the end result lacks the sparkle and brightness and sharpness of the photo. This was because color seemed secondary to the satisfaction I felt relating the various objects to one another.

I remember hearing that ‘everything is connected,’ and experiencing it as a mental concept. An idea. An underlying something that holds the physical world together. And I thought of this when I was drawing, looking at the woman, dog and girl for instance in relation to the wheels of the car. And the traffic lights on the lamppost in relation to the windows of the building. And so it went. Everything I drew was related to something else. In fact, I could only see one thing in relation to another thing.

It makes me wonder, what if instead of a class in ‘Drawing,’ the class was called, ‘Connecting Objects to One Another.’

It might be a new place to start. While I’ve heard people say, “Oh, I can’t draw to save my life,” or, “I can’t even draw a straight line,” I’ve never heard anyone say, “I can’t connect things with each other,” because of course we do, all the time, albeit unconsciously. It’s the act of drawing that makes us aware of it. Drawing, aside from making the world come alive so that I might feel more alive in it, inserts me smack into whatever has been created so that I can create it again, in my own way. And so partake more deeply and more consciously in this great thing we call creation.

Nancy Wait is an artist a writer, a writing coach/editor, and author of the memoir "The Nancy Who Drew, The Memoir That Solved A Mystery." She is a former actress (stage, film and TV) in the UK under the name of Nancie Wait. She hosted the blog talk radio show "Art and Ascension," and more recently, "Inspirational Storytellers." Nancy is currently at work on the sequel to her memoir, "The Nancy Who Drew the Way Home," to be published in 2020.
View all posts by Nancy Wait →
This entry was posted in ART, Uncategorized and tagged Art, connecting, creativity, drawing. Bookmark the permalink.

2 Responses to What Drawing Does